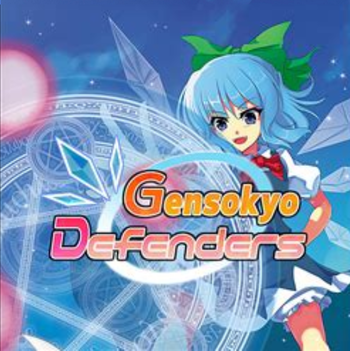 Gensokyo Defenders is a Touhou Project fan-game that combines elements of Tower Defense and Twin-Stick Shooters into a single package released in the US on Playstation 4 and Nintendo Switch in November, 2018. The latest thing to hit Gensokyo is a series of "War games," that Reimu immediately sees as analogous to Capture-the-Flag, wherein one team advances on the defending team's base. Cirno, in her latest bid to prove herself the strongest, decides to challenge anyone and everyone in these new games.
Advertisement:

Along with setting up traps to slow down the advancing enemies, the player character can attack enemies directly using a normal attack, two different Spell Cards, or the occasionally-available Last Word until all waves of enemies are defeated or their base is taken.