As with many character pages, some spoilers will be unmarked. You Have Been Warned. 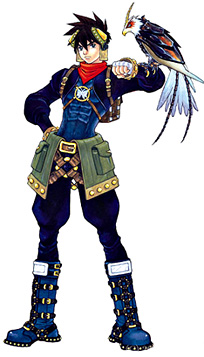 "These guys were no real challenge!"
Voiced by: Showtaro Morikubo (Japanese) and Cam Clarke (English)

The main character and a Geohound, a vagrant willing to do any job for gold, along with his partner Skye. Originally hired to escort Elena to Garmia Tower (a job outside of his normal duties), Ryudo stays on as her bodyguard during her pilgrimage to see the Pope.

A talking falcon who took it upon himself to accompany Ryudo three years ago. At 58 years old, Skye is ironically something of a paternal figure to the hotheaded Geohound. He knows more about Ryudo than anyone else in the group.

"I pray that we shall be safe ahead."
Voiced by: Hiroko Konishi (Japanese) and Jennifer Hale (English)

A songstress of Granas, Elena is the sole survivor of a ceremony to reinforce the seal on the evil god Valmar in Garmia Tower. When the ceremony fails, Elena is infected by a Fragment of Valmar. Her only hope lies in journeying to St. Heim and meeting with Pope Zera. Her temperament and manners are the polar opposite of Ryudo's, and the duo form a uneasy alliance.

"This is boring."
Voiced by: Mai Hoshikawa (Japanese) and Jodi Benson (English)

A physical manifestation of the Wings of Valmar, which were mistakingly sealed inside Elena. Millenia also functions as the alternate personality of Elena — wild, fun-loving and violent. She takes an instant liking to Ryudo and decides to help him, though her ultimate goal is to reassemble Valmar. In the beginning, Millenia secretly takes control over Elena's body whenever she is asleep or unconscious. Over time, Elena becomes aware of her alter-ego and a psychological tug-of-war ensues. 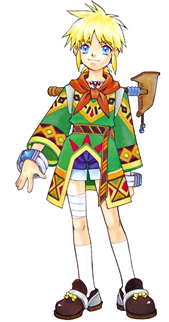 "Ah, that was a breeze."
Voiced by: Tomoko Ishimura (Japanese) and BJ Ward (English)

A bright and well-mannered young boy who is journeying with a circus troupe. He chooses to join Ryudo's party after the latter helps him retrieve a treasured medal. 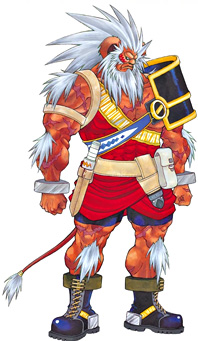 The biggest, fiercest, and most respected warrior of his clan. After his home was attacked by Melfice, Mareg set out from his island village to hunt him down. Though merciless toward his opponents, Mareg is soft-hearted and genial toward strangers.

You picked on the wrong people.
Voiced by: Junko Iwao (Japanese) and Kim Mai Guest (English)

An automaton from the time of the war between Granas and Valmar. Tio is programmed to serve the Army of Darkness, but with her master long dead, she finds that she cannot act without orders. Mareg, who is mistakingly designated as her new "Master", encourages Tio to serve her own ends and discover her feelings. 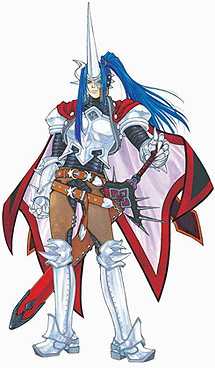 The initial antagonist of the game. Once a promising swordsman, Melfice unexpectedly went mad and became a bloodthirsty killer. His only family is Ryudo, who believes him to be dead.

A High Priestess of Granas and the church's lead inquisitor. At first appearing cooperative and helpful, she soon reveals himself to be blood-thirsty and slightly insane, cordoning off Mirumu and later threatening to burn the village for harboring evil. After a time the characters learn that to get anything out of the Church it's much wiser to go through her boss, Pope Zera. Selene is constantly accompanied by her Cathedral Knights, a ruthless brigade of soldiers who do the Lord's work. 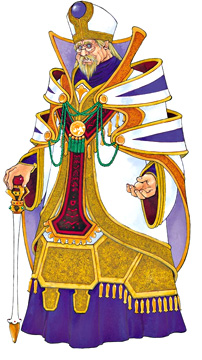 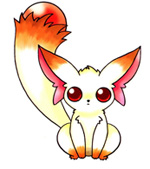