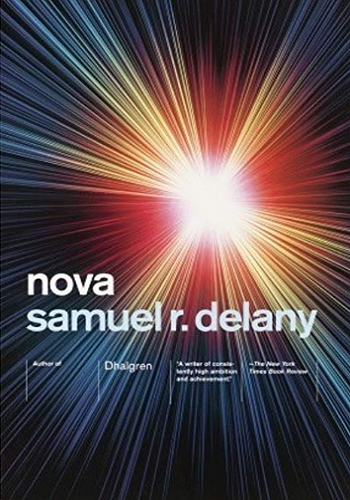 Nova is a New Wave Science Fiction novel by Samuel R. Delany, first published in 1968, nominated for the Hugo Award for Best Novel in 1969.
Advertisement:

At 3172, humanity had colonized half of a galaxy, which is divided in three parts: Draco, the oldest, Earth-based formation, stretched along the entire galaxy branch, Pleiads Federation, consisting of the namesake cluster and populated by middle-class people, and the Outer Colonies, populated by worker class with the sole purpose of mining Illyrion, extremely efficient and rare "fuel" consisting of superheavy chemical elements. These formations are basically ruled by Mega Corps, namely Draco's Red Shift Limited, based on transporting (and thriving because of vast distances between Draco's worlds) and Von Ray family, the founders of Pleiads. Due to the harsh means Von Ray ancestor took to protect Pleiads economical independence from Red Shift, Von Rays are called pirates and the family feud lasts for generations, up to the youngest - careless spaceship racer and playboy Lorq Von Ray and spoiled Prince Red, who was born without a right arm, and his sister Ruby Red.

After taking a beating from Prince, Lorq participates in his father's plans to bring down Red Shift economically. This can be down by lowering the transporting cost by producing more spaceships at lower price, which, in turn, can be only achieved by lowering the price of Illyrion - basically, getting more of the stuff. After hearing a weird story from his second pilot, Lorq gets an idea of scooping up Illyrion directly from an imploding/exploding star - a Nova star.

Unrelated to the PBS series, or the Marvel Comics character.