Characters that appear in the video game Watch_Dogs 2. 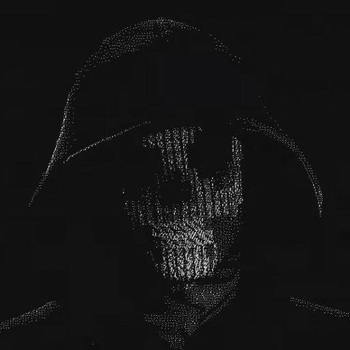 The Anti-Hero Team of 2. They're a group of hacktivists working to take back the city. 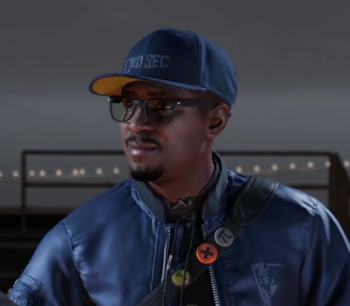 "It's gonna be a hell of a fight turning them back into people."

The Player Character of 2. He has a grudge against the justice system, after being wrongfully arrested. To sate this grudge and save the city, he joins DedSec to fight against the new ctOS. 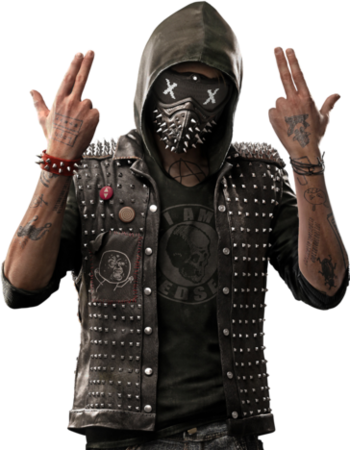 Fuckin' Hey, man.
Click here to see him without his mask 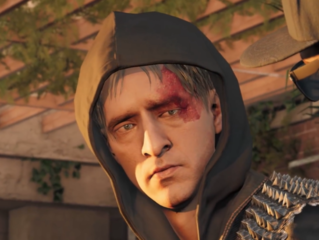 The resident engineer of DedSec, and Marcus' closest friend.

I want people to wake the fuck up.

The de facto leader and artist of SF DedSec. A calm but passionate young woman who wishes to raise people's awareness of the technology that surrounds them and expose Blume's corruption. 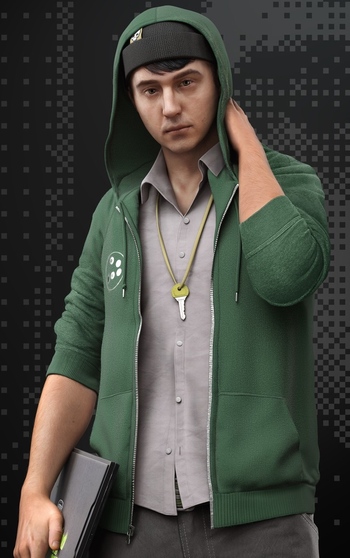 Josh is a hacker of DedSec, he's socially awkward, mostly quiet with little to say and doesn't seem as emotional as the other members. He also doesn't understand some slang words unless they're explained to him, such as "cornhole". However, he is a genius hacker who can break through just about any security system. 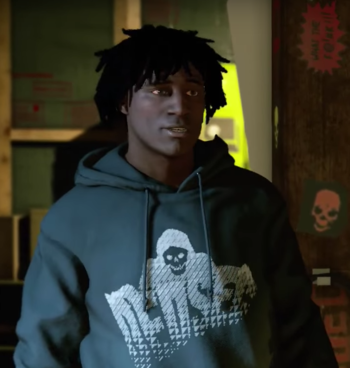 DedSec's chief of field operations and a programmer at Nudle, he mobilizes the troops against enemy hackers (which basically means he's the go-to guy for online missions and activities).

T-Bone Grady, aka Raymond Kenney, the creator of ctOS and the man behind the Northeast Blackout and one of the previous characters of Watch_Dogs 1. Click here to see tropes concerning him in the first game.

A HAUM security robot captured by Marcus during a heist on a HAUM Electronics van. It was re-purposed for DedSec.

❝ You're fighting a war nobody gives a shit about."

The Chief Technology Officer for Blume Corporation in San Francisco.

The leader of Prime_Eight, a hacking organization that is a consistent rival to DedSec.

The various criminal gangs that operate in the Bay Area, stretching from Silicon Valley down to Oakland and filling every neighborhood in between; The 580s, the Tezcas, the Auntie Shu Boys, Bratva, and Sons of Ragnarok.

A movie star, and a member of the New Dawn.

Steven Bader
The CEO of Haum Electronics. His company is in league with Blume by providing information on its users.
Mark Thruss
A known politician who wants to get the elections rigged in his favor by using ctOS.
Gene Carcani
A wealthy businessman who owns a pharmaceutical company. He plans to keep Bobo Dakes' new album to himself by paying off the singer.

Aiden makes a cameo in one of Marcus' side missions, pursuing Lucky Quinn's remaining criminal associates.

Jordi Chin
Aiden's old criminal contact, he stars in the "Human Condition" DLC in which he and Marcus deal with the Bratva.

A friend to Marcus and his family, she's in the San Francisco City government as a councilwoman who provides info for him.

A mysterious killer who terrorized San Francisco and eluded the San Francisco Police Department for many years, he makes a return to the city after being gone.

An unknown entity that is believed to live in-between the cracks in the walls, and you are only able to hear him shuffling around them. Many who have went out looking for him have mysteriously disappeared.