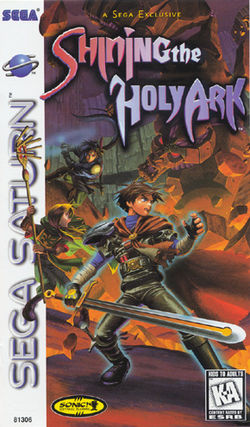 Shining The Holy Ark was the ninth installment of the Shining Series but the gameplay shares more in common with the original Shining in the Darkness than any other title in the franchise. It was a first person Dungeon Crawler rather than a strategy game. It’s also an indirect prequel to Shining Force III; several characters reappear in that game, and the continuing conflict between Spirits and Vandals is central to its plot.

In game three mercenaries Arthur, Melody and Forte are tasked with hunting down a ninja called Rodi who has holed up in an abandoned mine. When the group finally catch up to the ninja, a space-ship smashes through the roof mortally wounding everybody involved. In order to save their lives the Spirits inside the ship possess Arthur, Melody and Rodi. While still retaining their free will they gain additional skills. During this however Forte gets possessed by an evil spirit and goes missing.

Arthur, Melody and Rodi decide to temporally combine forces in order to escape the deadly mine, find Forte and find out just what is going on with these mysterious Spirits. Along the way they uncover an evil plot to revive a powerful Vandal that would doom the world to an age of darkness.

To help them out they meet up with female paladin Lisa, dragonman Basso, female ninja Akane, and the half-wolf ninja Doyle.

Shining of the Holy Ark Contains the following tropes: