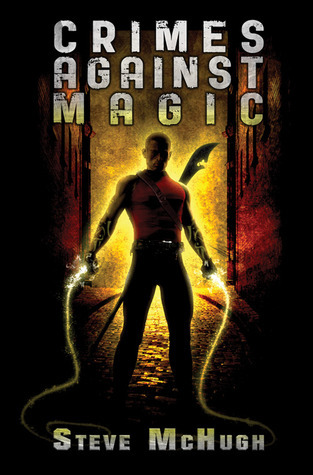 The Hellequin Chronicles is a series by British author Stephen McHugh chronicling the life of Nathaniel 'Nate' Garrett, a powerful sorcerer who starts the series as almost completely amnesiac, something revealed to be the result of one of the machinations of his worst enemy, Mordred. At the end of the first book, he gets his memories back and remembers who he is - Merlin's Assassin, and known only to a select few (at first) as Hellequin, the series' resident Bogeyman.

He then starts trying to unravel Mordred's backers, who are repeatedly hinted to come from within the organisation that Nate used to work for, Avalon. And as time passes, more and more villains crop up, often from Nate's extensive past, and they too show signs of there being something rotten in Avalon.

At the same time, Nate discovers that a series of Blood Magic curse marks that he's had since the age of eight (before which he can remember nothing) are fading, giving him clues to his parentage, new/ powers (in exchange for old ones) and

The series starts out as a lightweight British version of The Dresden Files, before steadily Growing the Beard, expanding the world, the supporting cast, developing a Myth Arc and giving serious Character Development all round. Each book has two concurrent plots, one in the present, one in the past, providing background to the present situation, excepting only Scorched Shadows, which has parallel plots featuring Nate and Mordred.

Tropes appearing in The Hellequin Chronicles