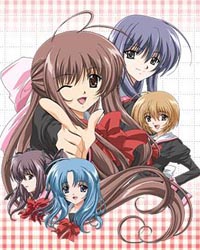 Ryo Mizuhara is an Ordinary High-School Student, happily living alone with his younger sister Akane... until one day a mysterious girl in jet-powered parachute crashes through their window. The beautiful Shizuka Masuda introduces herself as Ryo's new fiancé, selected by a supercomputer under a secret, experimental government project to address the declining birthrate. Between Shizuka's self-defense instincts and her Men in Black army, Ryo doesn't have a choice.

Cue wacky romantic comedy hijinks as Shizuka does her best to integrate herself into Ryo's life and win his heart.

Adapted from a Princess Soft Visual Novel, it consists of 13 half-length episodes which aired alongside W~Wish (also from Princess Soft) during the "Princess Hour."