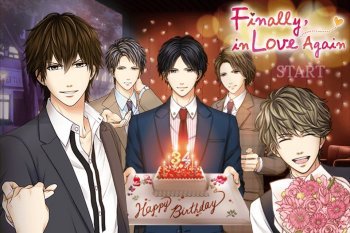 Left to right: Momoi, Sosuke, Aki, Yuto, and Yoh.
Another year alone... What a depressing birthday. Until...
Advertisement:

Finally, in Love Again is a Romance Game Visual Novel by Voltage, Inc. for iOS and Android devices. In it, our protagonist is a pastry chef in her thirties and looking forward to a possible promotion. At least until an accident causes her to drop pastry on a customer, and her boss fires her for it. When she gets home, she receives a package from her mother containing an invitation to a singles event. When she arrives, the protagonist is mortified to find out that this is supposed to be an event catering to people in their early 20s, while she has just turned 34 that day.

Despite trying to keep a low profile, her former co-worker's attempts at sabotage only draw the attention of several of the game's love interests to her. As the singles event draws to a close, she's called on to pick one of her five suitors...

And then the game begins.

Finally, in Love Again provides examples of the following tropes: