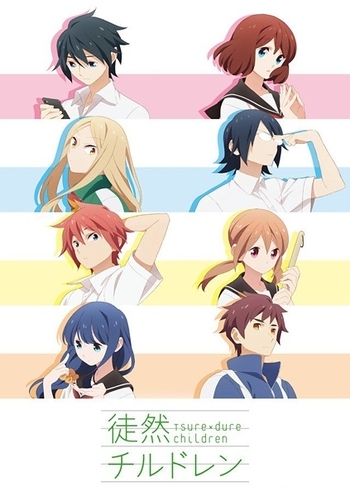 Tsurezure Children (徒然チルドレン, also romanized as Tsuredure Children or Tsure-dure Children, meaning "Tedious Children") is a Yonkoma webmanga written by Toshiya Wakabayashi. It started off in 2012 as a collection of various doujinshi stories involving the love between students at a particular high school (with some stories sometimes intersecting), until Wakabayashi gathered them all and got them officially published, first being serialized in Bessatsu Shonen Magazine from 2014 to 2015 and then in Weekly Shonen Magazine from 2015 to 2018, complete with redrawn art.

An anime adaptation was announced for 2017

and premiered during the Summer 2017 Anime season. It is available for legal streaming with subtitles on Crunchyroll here

The series is completed at 212 chapters, with the 12th volume released in Autumn of 2018.

Beware of non-marked spoilers for the later chapters.