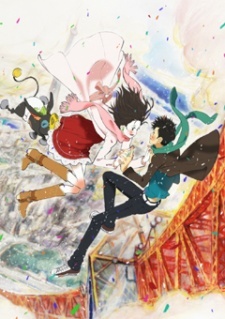 Tokyo Marble Chocolate is an Romantic Comedy anime that deals with two young adults, Yuudai and Chizuru. Previously both of them have been unlucky in love, now they have been dating each other for some time, but because of their previous bad experiences in relationships and their own issues and insecurities they are being driven them apart: Yuudai is jittery, cowardly and can't bring himself to tell Chizuru that he loves her, while Chizuru becomes quite clumsy whenever she falls in love and she's afraid this will scare her boyfriend away. Luckily, with the intervention of a pet Mini-Donkey they might find a way to sort their issues.

The story consists of 2 OVAs, each tells the story from the perspective of one of the protagonists.

This Anime provides examples of: