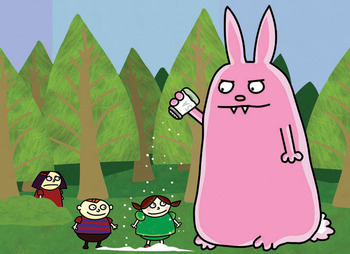 Three children, Lulu, Suzy and Sam, go into the dark woods looking for their dog Muffin. In the forest they find a giant, carnivorous, talking pink rabbit. Big Bunny! Big Bunny tells them not to run and that he's their friend.

Of course, really he'd love to eat those plump, tender, yummy, delicious children. So he seduces them with nonsensical stories.

This is a flash series made by Amy Winfrey, the same woman behind Making Fiends and Muffin Films. Big Bunny was supposed to have 10 episodes, but Hypnotic.com wanted to stop production after episode six. Hypnotic eventually agreed to allow Amy Winfrey to make one final episode to wrap up the series. After this happened, Amy decided to make a new web series that she would try to keep independent for as long as possible, and Making Fiends was born.

This flash cartoon is referenced in The TTYL Series.