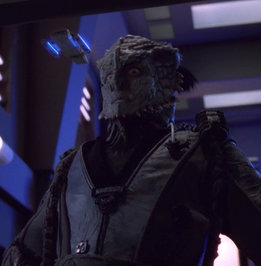 The Jem'Hadar encounter problems with shrinkage
The Defiant is on scene to investigate a Negative Space Wedgie which causes objects and organisms to shrink to a fraction of their normal size. Dax, Bashir, and O'Brien are sent aboard the runabout USS Rubicon, but they are cut off from the Defiant when the ship's tractor beam mysteriously cuts out. The now miniscule crew in their tiny runabout are left on their own to figure out what happened.

Meanwhile, the Defiant has been disabled and commandeered by a strike team of Jem'Hadar soldiers, and the crew must struggle to take back control of the ship, or destroy it before it can be delivered into the hands of the Dominion.