Literature / The Adventures of the Princess and Mr. Whiffle 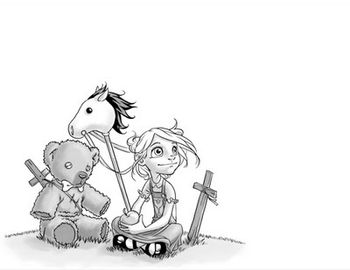 Not for kids.
The Adventures of the Princess and Mr. Whiffle is a story by Wisconsin author Patrick Rothfuss, better known for his Heroic Fantasy best seller The Name of the Wind. Released in March 2010, it's a fairy tale about a princess and her teddy bear, Mr. Whiffle.
Advertisement:

) fool you; this book is most definitely not for young children, unless you want to emotionally scar them for life. For adults, on the other hand, it's one of the best parodies of fairy tales in the vein (no pun intended) of the Brothers Grimm. As Rothfuss puts it, "I think of it as Calvin and Hobbes meets Coraline, with some Edward Gorey mixed in."

The book focuses on the titular duo, as well as a mysterious "thing under the bed". It has three separate endings; unlike the Choose Your Own Adventure series, however, it's meant to be read in a linear fashion. How the story ends depends on where you decide to stop reading, so you get a good ending, a bad ending, or..."the one with the teeth".