Web Video / The Cult of Scratchwood 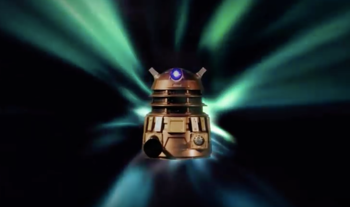 Bren: You named the Cult of Scratchwood after... Matt's model railway. Why?
Derek the Dalek: There is a term... that human uses. I believe you would say... that I was being... sentimental.
Advertisement:

The basic premise of Cult of Scratchwood sees four misfit Daleks, Derek, Monty, Darren and the Dalek Supreme, stuck sharing ordinary human Matt's flat. They spend most of their time fruitlessly scheming to conquer the world in the name of the Daleks, and causing everyday trouble for their unfortunate roommate in the process.

Thanks to animatronic Dalek puppets and good editing, the series boasts impressive production value for a fanmade production.

The Cult of Scratchwood provides examples of: