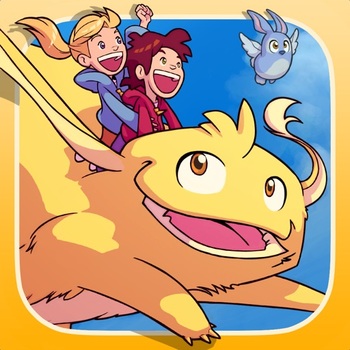 Buddy & Me is a Kickstarter-funded Endless Running Game for iOS by Sunbreak Games.

Remember the scenes of Atreyu and Bastian riding the fluffy dragon in The NeverEnding Story?

Well, this is Flying on Falkor: The Game.

A game begins with a boy in bed. Click the "dream" button, and a grinning, furry face appears in the bedroom window. Then it's out of bed and through the door you go, running and jumping along an endless series of platforms high in the trees of a magical forest collecting stars, additional time to stave off the alarm clock from waking you, and other bonus items.

Your furry flying friend keeps pace with you, occasionally providing assistance such as his letting you bounce off his Trampoline Tummy, or grab his tail and Vine Swing across a gap. Collect enough stars to fill the meter, and you hop onto his back and take off into the sky for a while.