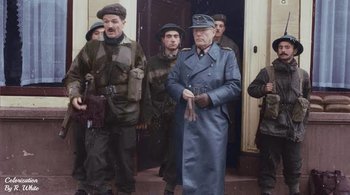 Lieutenant General Wilhelm Daser, commander of the German 70th division, leaving the German headquarters after surrendering Middleburg to the British Army, Netherlands, November 08, 1944. (Colorized)
In time of war it suits the enemy to aim his guns at adorned shields, ornaments, silver and gold cloaks, silk shirts and all similar things. Whether one possesses a jacket or not, it is best to wear a narrow-sleeved shirt with faded colours.
— Haile Selassie, former Emperor of Ethiopia
Advertisement:

"In a conflict between two armies with uniforms, all other things being equal, the guys with the more elaborate uniforms will lose."

, snappy dresser and Minister of War for the Imperial Russian Army up until 1915. His name has given rise to a piece of military lore which is often echoed in fiction. The "Sukhomlinov Effect" states that in any military conflict between a uniformed and non-uniformed army, the guys with uniforms will lose (armour being an exception, presumably). Special attention here goes to the uniforms of the officers: big hats, jangling medals, and feather plumes are the kiss of death.

The narrative reasons are obvious. First, the trope has an anti-authoritarian vibe, given that fancy uniforms symbolise wealth and power, and audiences tend to root for the underdog. Second, overly elaborate wargear suggests a certain amount of decadence — you're more interested in displays of wealth than what is practical and sensible in combat, so you're probably not going to be so good in a fight.

In Real Life, the trope gets periodically averted and played straight for a reason: before the nearly-universal adoption of camouflage uniforms for field duty during World War One and relegation of elaborate uniforms to city dress and ceremonial dress, the sumptuous uniform was a propaganda piece as much as it was clothing. It was designed to impress, to show the power of the nation and leader who fielded it. Cue the unfortunate effect of leaders who saw their state and power base eroded trying to outshine any potential opponent for diplomatic and propaganda reasons. The fact the same leaders who see they are about to lose are terribly fond of "White Elephant" complex and advanced weaponry also plays itself straight periodically.

Also, the flashier your uniform, the easier you are to hit. Back in the olden days, it was the only way that soldiers could tell who was in charge and therefore, who to take their orders from. Given the fact that fighting then relied on maintaining a cohesive formation, this was pretty much a necessity. However, as military firearms became more and more accurate, marksmen would make a point of aiming at the fancy horse-riding guy with the big feathery hat every time, and so those uniforms became a liability. It took the better half of a century until military men decided to wear something a little more discreet.

In fiction, La Résistance uses this trope almost every time, but it can also be generalized to many sorts of conflicts. The only exceptions to this might be in The War on Terror, but then again...

A Sub-Trope of Dress-Coded for Your Convenience.