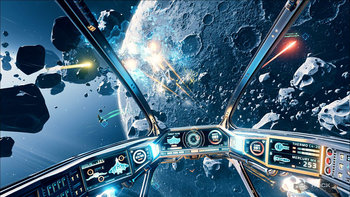 Just another day chillin' with the Okkar.
Advertisement:

EVERSPACE is an arcade 3D space ship simulator/roguelike game with procedural enviroments developed by Rockfish Games (creators of the Galaxy on Fire series). Also, get ready to die, a lot. It's essentially if FTL: Faster Than Light was in 3D and you could actually control your ship. The two games in fact have incredibly similar mechanics; roguelike elements, a sector map that you jump from point to point through to get to the gate at the end, pursuing enemies that dog you if you linger too long and a sense of progression and reward.

In the distant future, the Colonials (consisting of mankind and a few other species) entered an uneasy truce with an alien race called the Okkar. The Colonials and the Okkar had found themselves evenly matched, and fought an extremely destructive war over the resource-rich Cluster 34. To enforce the truce, a demilitarized zone was established between Human and Okkar space. This demilitarized zone is off-limits to Colonials, with the exception of the single human corporation that secured mining rights. The player is a pilot trying to make their way through this demilitarized zone, which is effectively a lawless place full of outlaws, hostile aliens, and lots of riches.

Everspace was originally developed for macOS and Windows. It has since been ported to Linux, as well as the PlayStation 4, Xbox One, and Nintendo Switch consoles.

A Kickstarter campaign for Everspace 2 began in 2019