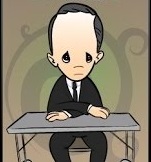 Ask Lovecraft is a Q&A-style web show created by Leeman Kessler, which started in 2012.

The premise is the famous Cosmic Horror Story writer H.P. "Howie" Lovecraft has been resurrected through some sort of mysterious dark science (the series often hint that even Lovecraft himself doesn't quite understand how it works). To pass his time, Lovecraft answers questions and gives advice to the poor fools who dare seek it. It was hosted on Channel Awesome until Kessler's departure from the site in April 2018.

In January 2022, Kessler announced that he was planing to end the weekly series within the year, citing that ending the show on "the even decade" would be "neat and clean and requires little explanation for most". Though he has assured his audience that he might still produce the occasional special episode. He has also begun working on a Spiritual Successor of sorts, Always Has Been, a series of short videos released through TikTok, concerning tales of strange, weird, and, at times, eldritch lore about his home state of Ohio.

This series contain examples of the following tropes:

H.P. Lovecraft: This is not some cosmic sense of dread, just pedestrian fear of one's self, facing one's true self with no illusions, seeing all of one's adequacies or lack thereof.