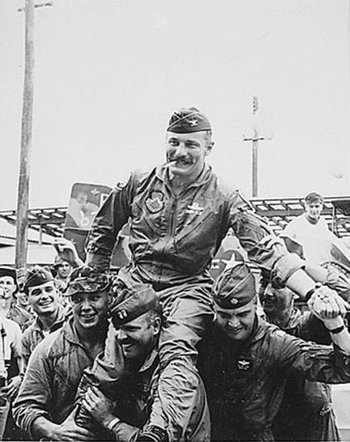 Robin Olds being carried by his men after the success of Operation Bolo, 1967.
Advertisement:

The son of an Army Air Corps general, Robin Olds (July 14, 1922 – June 14, 2007) is best known as a Triple Ace combat pilot who was willing to break a few rules to get the job done. Not to mention his self-confessed tendency to say exactly what he happened to think, no matter how inappropriate it was or who he was talking to.

Due to his father's career, Robin grew up around the likes of World War I flying ace Eddie Rickenbacker, and knew that it was his destiny to become a fighter pilot one day. He enrolled in The United States Military Academy at West Point in June of 1940, and graduated in 1943 (while West Point was normally a four-year institution, the intensity and scale of the fighting in World War II necessitated an abridged curriculum). He was trained to fly the Lockheed P-38 Lightning, and was deployed to England in 1944. By the end of the war partway through the next year, he had been credited with 12 air-to-air kills, had risen to the rank of Major, and had become the commander of the 434th Fighter Squadron (his predecessors having all been promoted or killed in combat or accidents).

After the war, he went on to fly fighter jets, and married Hollywood actress Ella Raines. He ended up being sidelined throughout The Korean War, and he would not see combat again until he was assigned as Commander of the 8th Tactical Fighter Wing during The Vietnam War. During the war, he introduced classic dogfighting strategies to pilots who had never been trained in air to air combat, and was the mastermind behind Operation Bolo, where McDonnel Douglas F-4C Phantom fighter jets from three different wings worked together to lure out the North Vietnamese MiG-17s and MiG-21s and engage them in combat. To accomplish this, Olds' wing masqueraded as slower and more vulnerable F-105 Thunderchief fighter bombers, pouncing on the North Vietnamese pilots as soon as they came in range. This was also around the time he cultivated the mustache that he is also known for.

He gained four more kills in Vietnam, and upon learning that he would be withdrawn from combat upon getting his fifth killnote Which would make him the first American ace of the Vietnam War, and very valuable to the North Vietnamese for propaganda reasons, proceeded to let his wingmen take any kills he set up until he was withdrawn at the end of his tour. He would later become Commandant of Cadets at the Air Force Academy and be promoted to Brigadier General. He finished his career in the Air Force with the Office of the Inspector General, before he retired in 1973.

With the help of his oldest daughter, Christina, Olds finished his memoirs, titled Fighter Pilot shortly before he died of congestive heart failure in 2007.

Has an article on ''Badass of The Week''