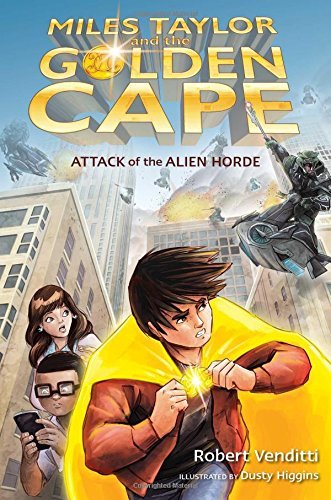 Miles Taylor And The Golden Cape is a comic/novel series by Robert Venditti.

Gilded is the hero of the planet Earth. Where did he come from? No one knows. How did he get his powers? No one knows. Who is he really? No one knows. All that is known is that he just showed up one day in October of 1956, and since then, the world has looked to him in times of trouble.

Miles Taylor is a twelve-year-old kid who recently moved to Atlanta with his dad after his mom left him. Because he's the "new kid", nobody likes him, everyone avoids him, and the only time anyone ever notices him is when Craig "The Jammer" Logg decides to torment him.

All that changes one day, however, when, during an attack by an alien, Gilded is knocked into a parking garage that Miles was in, causing it to collapse. In his final moments, Gilded takes off his cape and hands it to Miles.

Now, Miles is the new Gilded, and has to learn to be the hero his planet needs.

So far, two books have been published in the series: Attack Of The Alien Horde, and Rise Of The Robot Army.

Miles Taylor And The Golden Cape contains examples of: