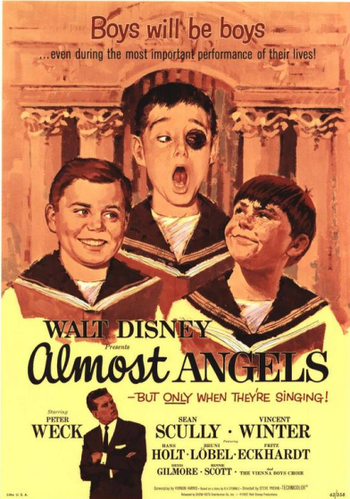 Almost Angels (released in the UK as Born to Sing and in Austria and Germany as Ein Gruss aus Wien) is a 1962 Disney film about a group of boys in the Vienna Boys' Choir. The main character is Tony Fiala, a working class boy whose father sees no future for him in music. Nevertheless, with the support of his mother, he successfully auditions and becomes a member of the choir. While in the choir Tony faces both academic challenges and the jealousy of one of the older boys, Peter, whose deepening voice is signalling the imminent end of his own choirboy career.

While the lead characters were played by professional actors, many of the supporting child actors were actual members of the Vienna Boys Choir. The filming took place in the Augarten Palais, the surroundings of Vienna and some other places of the beautiful Austrian landscape. Not related to the Paul Hogan film Almost an Angel.