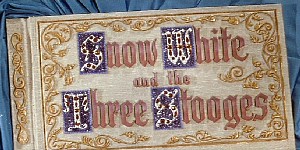 "And if, by now, you're wondering what on earth the Three Stooges have to do with the fairy tale of Snow White, it's very simple. In this version, we're telling the story of... Snow White and the Three Stooges!"
— The Narrator
Advertisement:

A 1961 live-action retelling of Snow White directed by Walter Lang, starring Carol Heiss (a then-recent Olympic gold medalist in figure skating) as Snow White, with The Three Stooges taking the place of the Seven Dwarfs.

The story follows the fairy tale, with a few twists, such as Prince Charming having been raised by the Stooges after they saved him from an assassin when he was a boy (he'd lost his memory in the attack). The film started as a Non-Actor Vehicle for Heiss, similar to the Sonja Henie films also by 20th Century Fox, with the Stooges only being brought in when Fox realized that Heiss couldn't carry the movie by herself.