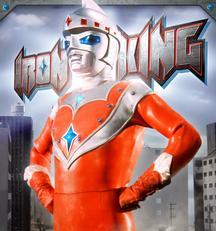 In 1972, from Nippon Gendai and Senkosha, came a tokusatsu show that was somewhat unique. In response to various terrorist attacks happening throughout the Japanese countryside, the National Security Organization of the United Nations has sent two cowboy heroes, the playboy Gentaro Shizuka, and the bumbling comic relief Goro Kirishima. Those of you who are genre-savvy might think Gentaro would be the titular Iron King, based on his appearance and mannerisms, but it's actually Goro that transforms to fight evil.

Not to be confused with The Iron King, the first book in the Iron Fey series.