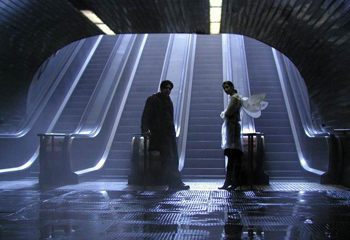 Kontroll is a 2003 Hungarian film directed by Nimrod Antal, starring Sandor Csanyi and Eszter Balla. The title refers to the Hungarian word for the act of metro employees checking for tickets. The film focuses on the daily struggles of a group of metro ticket inspectors in a subway system based on (and shot in) the Budapest Metro. They spend their day exploring abandoned tracks, fighting with irate customers, chasing down an elusive graffiti artist, and competing with a rival team of Kontroll agents. He and his fellow inspectors struggle with their jobs because every one of their customers resents them for harassing them in their daily commute. Meanwhile, a serial killer has been stalking the metro pushing customers into the tracks. There's also a woman in a bear suit. You heard us.