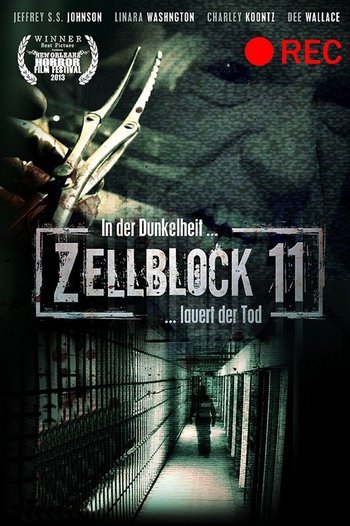 Apparitional (Alternate Title: The Haunting Of Cellblock 11) is a Horror Movie by Andrew P. Jones.

Joel (Jeffrey Johnson), Kate (Linara Washington), Roger (John Zderko), and Berger (Charley Koontz) are the crew for a ghost hunting show called "Ghost Sightings". They've been traveling across America trying to find a place where they can find definite proof of ghosts existing. Sadly, all they've gotten is a few small noises and MAYBE something. As a result, they're overshadowed by other more popular ghost hunting shows, and their boss, Ms. Simon (Dee Wallace), is threatening to cancel the show.

They ultimately manage to get a break when an old man named Mr. Gaffney (Bill Lithgow) comes to them, telling them about some property he owns which he is certain beyond a shadow of a doubt is haunted. To prove this, he shows Joel the scars he got from when a ghost scratched him.

The location he sends them to is known as "Freeling State Penitentiary", an old prison that was closed down 10 years ago. Enthused, the team goes to the town it's in to check it out. Everyone there insists they turn around and go home, and that spending the night there would be suicide. Undeterred, however, and determined to get a worthwhile episode, the team decide to spend the night in the prison.

However, as the night goes on, it soon becomes clear they should've listened to the townspeople.