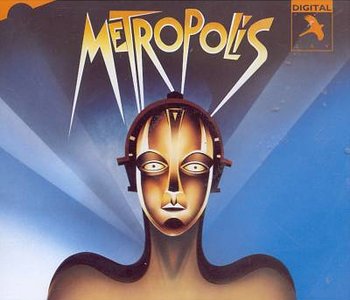 "The machines are beautiful. Creation of man. They're the strength of the city, they're the heart of the plan..."
John Freeman: I keep on telling you that workers are expendable, my eyes are on the future, I need robots, I need them now.
Advertisement:

Metropolis is a musical play based on the 1927 silent film by the same name. It was directed by Jérôme Savary, had a score written by Joe Brooks and Dusty Hughes. The initial cast featured Graham Bickley, Judy Kuhn and BRIAN BLESSED, among others. It was originally performed in 1989 in both Britain and Germany. Since then, it has been staged several times in the United States as well. Joe Brooks commited suicide in 2011 and forbade any more stagings of it after his death. However, the actual rights remained rather murky, and the play has nevertheless continued to be performed even afterwars.

Metropolis, the last city in the world, is a paradise - if you are a member of the upper class, that is. All natural resources have been extinguished, you see. So the city relies on slave labour to keep running. The slaves are locked up in an Underground City where they are forced to work at machines and never even allowed to see the sun. However, the city ruler, John Freeman, is unsatisfied with his workers' lack of effectiveness and plans to have them all replaced by robots. His plans proves to be difficult to accomplish though, due to the efforts of his son, Steven, who does everything he can to improve the workers' conditions, and Maria, the teacher of the workers' children, who Steven has fallen in love with.