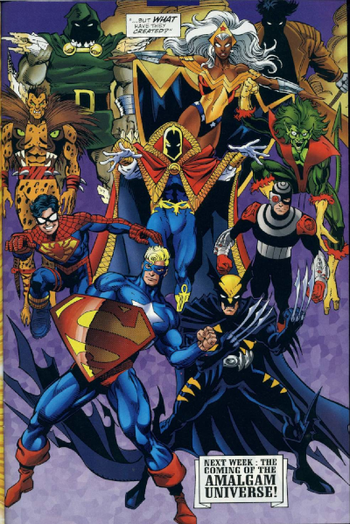 In 1996, Marvel Comics and DC Comics co-created a Limited Series called, oddly enough, Marvel Versus DC, in which the Superheroes of the two powerhouse Comic Book companies met, fought, and came out friends— then had their memories of the whole affair erased. Except for a very few, who remembered.

It seems that The Multiverse of each company's main continuity was in fact the creation of two Sufficiently Advanced Aliens known as "The Brothers". For eons, they were ignorant of each other until the first Intercontinuity Crossover brought them to each others' attention. Each wanting to be the singular Anthropomorphic Personification of the Multiverse, they decided that in true Superhero fashion, the matter could only be settled with a Fight Scene. Or rather, a series of one-on-one battles between the most similar heroes. Some of these fights were between characters who would later be Amalgamated, such as Spider-Man and Superboy. Some were matched by ability; the Badass Normal Batman versus the Badass Normal Captain America, for example. The loser's universe would be destroyed, so both sides had plenty of motivation to kill each other. At the same time, a young man named Axel Asher, A.K.A. Access, discovered that he was a shard of the original joined reality. This was apparently a mantle that was passed down from generations (he acquired the abilities from a homeless man who died soon after). Access could only stand by and watch as the two universes did battle. Marvel was ahead six to five, when suddenly...

The Powers That Be named the Living Tribunal and The Spectre try to take the pressure off by merging both universes into an Amalgam where the iconic main characters of each world merge into single beings with aspects of each— Wolverine and Batman become Dark Claw, Superman and Captain America become Super Soldier (he really was one, too). Some were merged because they were similar in powers or purpose, others because their names sounded alike (resulting in some awful punny names) and still others for the heck of it (see the list below). Each had a "remembered" history that splits the difference between the merged characters— there was a Golden Age Super Soldier who joined the All-Star Winners Squadron, a Wild West team of mutant "malforms" called Generation Hex, etc.

The Brothers quickly pulled themselves apart, thus separating the Marvel Universe and DC Universe once again. Angered, they decided to forego the contest and simply battle each other. This would've surely resulted in the destruction of both universes.

Access managed to bring Cap and Bats to the interdimensional battlefield between the Brothers, and showed the big boys a first-hand look at the beings whose realities they were planning to eliminate— and they liked what they saw. Impressed by the iron wills of these two mere mortals, and seeing that they weren't so different, the Brothers called off their grudge match, the Reset Button was pressed, the limited series ended, and all was good... for a while.

Turns out Access can't stay in one universe too long, or his powers go haywire and begin transposing inhabitants from one universe to another. And in the sequel All Access, it turned out the Amalgam Sorcerer Doctor Strangefate had hidden himself in Doctor Strange's mind, and burst out to try to re-create his universe by merging the Big Two. So once again, cue fight music as the JLA and X-Men throw down, only to be saved by the original Doctor Strange creating an independent Amalgam Universe without affecting the original two (though based on the first one). This Amalgamverse was safely tucked away inside Access and again all is well. Except for a few whacky Time Travel adventures in the Unlimited Access miniseries, but those had no plot effects and were apparently just for fun.

Several sets of Amalgam comics set in the merged universe have been published jointly by both companies. The titles include Bruce Wayne: Agent of S.H.I.E.L.D., Iron Lantern, Bullets & Bracelets, Justice League Avengers, and many others.

In the Marvel Multiverse, it was originally listed as Earth-692 before being retconned to Earth-9602. Meanwhile DC has established that it exists on Earth-496.

Tropes demonstrated by the Amalgam Universe: