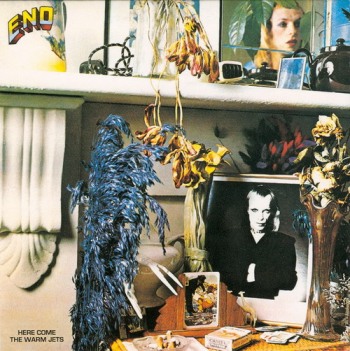 "If you'll be my flotsam, I could be half the man I used to/They said you were hot stuff, and that's what baby's been reduced to..."
Advertisement:

Here Come the Warm Jets is a 1974 album by Brian Eno. Jets was Eno’s solo debut, after playing synth and tape effects on Roxy Music’s first two albums and recording the experimental (No Pussyfooting) with King Crimson founder Robert Fripp. Fripp plays on the album, as do Eno's former Roxy bandmates Phil Manzanera, Andy Mackay, and Paul Thompson. It’s probably his glammiest album, but also very eclectic. It was listed at #432 in Rolling Stone's Rolling Stone: 500 Greatest Albums of All Time.