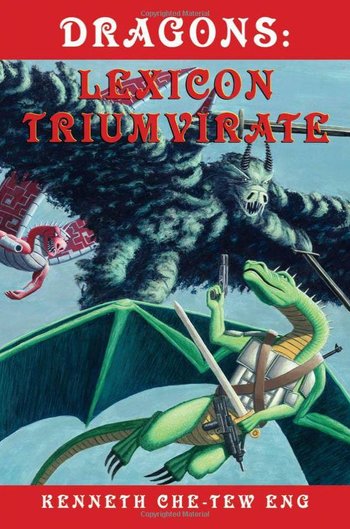 Rifts in time during the Middle Ages allow humans to summon powerful prehistoric beasts and future technologies in this fantastic novel about the influence of perception on reality and the role of political power on the conversion of knowledge into ideology.

Under the auspices of the hominids, dragon king Drekkenoth has attempted to use knowledge to corrupt the minds of all the dragons in his kingdom but is stymied by the existence of a single source of uncorrupt knowledge: a tome of omniscience known as the Lexicon.

Dennagon, a lowly dragon sentry, takes it upon himself to discover this lexicon, an act that leads to his expulsion from the mainstream world of worms and humans and the creation of a band of dissident dragons who wage war on the corruption of Drekkenoth and his human masters.

During his seemingly endless quest to find the Lexicon, battles with cyborg technodragons and bewildering encounters with the enigmatic forces of time provide Dennagon with insight into the ephemerality of omniscience and the instability of the temporal as he discovers that there is more to life than the lore he has so desperately been searching for.