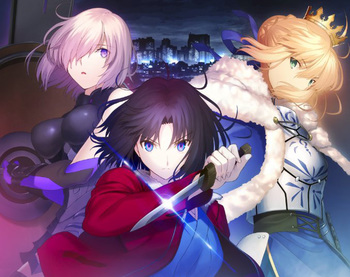 L - R: Mash Kyrielight, Shiki Ryougi and Artoria Pendragon
The universe(s) of the writings of Type-Moon'snote The company's official name is Notes scenario director, Kinoko Nasu. It's made up of several "sub-universes" ("franchises" that share characters) that share most (but not all) details between each other. Also of note is that the franchises themselves often include several alternate continuities, since the primary works are visual novels with multiple and ''very'' mutually exclusive paths.
Advertisement:

A list of the works within the multiverse (and a short summary):

Notes (Our Angels Are Different)

The Garden of Sinners (Our Souls Are Different)

Witch on the Holy Night (Our Mages Are Different)

Tsukihime (Our Vampires Are Different)

Fate (Our Magics Are Different)

DDD aka Decoration Disorder Disconnection (Our Demons Are Different)

The Room of the April Witch

The Nasuverse is mostly unified in its rules on Functional Magic and related topics (like non-human species). Though crossovers are rare, they do happen, even if in incredibly roundabout ways.

Then again, as already stated, it isn't internally consistent because large portions of the source material are mutually exclusive, and some parts of it are obviously not canon to begin with (self-parodies, etc.); the canon universe is more about characters and the interaction between them, and less about the actual plot(s) taking place. Doujinshi authors take full advantage of this, and the amount of fan material available is staggering. Many works might not even be truly set in the same 'verse.

Due to the sheer amount of rules and terminologies involved within the Nasuverse, there is now an analysis page as a guide to wade through them, also serving as a dissection of the setting through tropes. Please feel free to contribute. Also now has a memes page.

Tropes that apply to the Nasuverse in general: