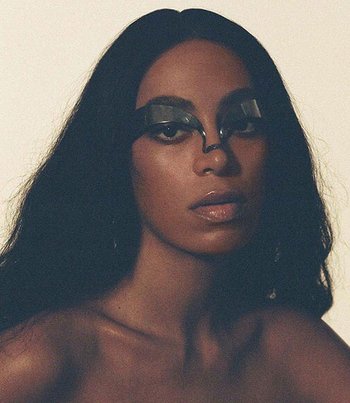 I saw things I imagined
"It's like cranes in the sky
sometimes I don't wanna feel those metal clouds"
Advertisement:

Being in the Knowles family and a touring member of Destiny's Child, she was involved in the music industry from an early age, releasing her debut album Solo Star at age 16. While it wasn't commercially successful, she was already involved in the production and songwriting aspects of the record.

After taking a hiatus from music, during which she had a number of minor roles in films, Solange released her second album, Sol-Angel and the Hadley St. Dreams in the year 2008. Even though it was in its majority rooted firmly in the R&B, soul and pop genres, it did take influences from more alternative and electronic sounds, which would continue to influence her on the rest of her career.

In 2012, she put out her EP True, made in collaboration with Dev Hynes (a.k.a. Blood Orange). This record was heavily inspired by 80's new wave, synthpop and R&B which made her a name in the indie circles as well as with most critics.

Her album A Seat at the Table came out in 2016, and it was one of the most acclaimed releases of that year. In it, she explored themes of black identity, racism, violence and her own personal experiences. It earned Solange her first Grammy and her first number one record.

When I Get Home was surprise-released in 2019, featuring some of her most abstract and experimental music to date, and it was accompanied by a visual film so far exclusively released on Apple Music.