Literature / Go the Fuck to Sleep 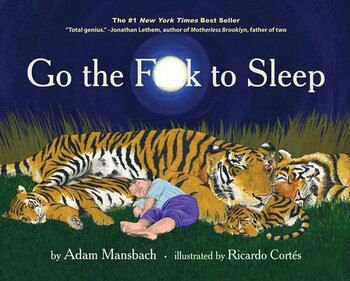 Go the Fuck to Sleep is a 2011 children's book parody by Adam Mansbach.

It is the lament of a parent whose child will not go the fuck to sleep. It went viral, and was then helped by an audiobook read by

Samuel L. Jackson (and later on, by

Was later turned into a Bowdlerised version aimed at children called Seriously, Just Go to Sleep. In September 2014, a proper sequel was released, You Have to Fucking Eat

. A third book followed, Fuck, Now There Are Two of You.

In 2020, Mansbach released a self-parody of the book, Stay the Fuck Home, in response to the COVID-19 Pandemic and recommendations to self-quarantine at home to slow down the spread of the virus. Samuel L. Jackson once again provides the dramatic reading.

I'll read you one very last TV Tropes page if you swear you'll go the fuck to sleep.