Recap / Avatar: The Last Airbender "The Siege of the North, Part 2" 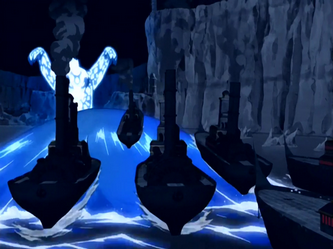 "I don't need luck, though, I don't want it. I've always had to struggle and fight, and that's made me strong. It's made me who I am."
Zuko
Advertisement:

The Season Finale. Zuko has taken Aang's body, but now struggles to find shelter in the freezing temperatures of the North Pole, while Sokka, Katara, and Yue ride Appa to search for him and Aang. Meanwhile, Aang's spirit, still in the Spirit World, goes to the menacing Koh the Face Stealer, who literally steals one's face should they show any emotion, for information on the locations of the Moon and Ocean Spirits.

At the Northern Water Tribe, Firebenders and Fire Nation tanks have breached the outer wall, and are now assaulting the smaller inner wall. Iroh cautions that they're still on a deadline— once the full moon rises, the Waterbenders will be unstoppable. And that's when Admiral Zhao reveals his master stroke— take away the Waterbender's abilities by slaying the moon spirit. Iroh is horrified by the plan, but Zhao rebuffs him.

Cut back to Zuko and Aang. Zuko starts reminiscing to Aang's unconscious body how there's always something getting in the way, like the blizzard currently keeping them trapped. He says that Aang would never understand this— that he's like Zuko's little sister, a Firebending prodigy who's always been Born Lucky, while he was lucky to be born.

Meanwhile, the Fire Nation soldiers have broken through the second wall and are now well into the city, but night has fallen, and the Waterbenders, newly empowered by the full moon, are easily beating them back. Aang learns from Koh that far from needing the spirit's help, it's the other way around— if he doesn't do something, someone's going to kill them. Thanks to Koh's hints, Aang works out that the Moon and the Ocean spirits are actually the koi fish from the last episode, and some help from Hei-Bai quickly returns him to his body— and just in time too, for the flash of Aang's spirit returning to the physical world has clued in the nearby rescue party on Aang's whereabouts. Katara defeats Zuko easily, but Aang refuses to leave the exiled prince to die in the snow, taking him with them.

Zhao shows up in the hidden oasis to grab the moon spirit and stuff it into a bag, causing the moon to turn blood red and shutting off all Waterbenders' abilities. The spiritual disturbance is felt by both Aang and Yue, who reveals that the Moon Spirit saved her life as a child by putting a bit of its essence into her.

Aang shows up just in time to see Zhao about to finish off the Moon Spirit. Aang pleads with the power-hungry Admiral that hurting the Moon Spirit will hurt the entire world in ways that he can't even imagine. Iroh chimes in, threatening Zhao that he'll do tenfold whatever Zhao does to that spirit. Seemingly cowed, Zhao puts the spirit back in the oasis— before killing it with a fire blast!

The moon goes dark. Iroh unleashes a Firebending assault of such fury that Zhao immediately flees— only to run into an escaped Zuko, who is furious that Zhao tried to assassinate him. Aang goes into the Avatar State and, in joining with the Ocean Spirit, destroys the entire Fire Nation armada and army. Yue realizes that she can save the Moon Spirit by returning the life that it gave her. She sacrifices herself to become the new Moon Spirit, sharing one last kiss with a grief-stricken Sokka as she fades away.

The arrival of the moon in the sky causes the Ocean Spirit to stop its rampage, leaving Aang on the outer walls of the city. Zhao is, in short order, defeated by Zuko, shocked when he sees the moon back in the sky, and pulled underwater by the Ocean Spirit in retaliation for slaying the Moon. Despite everything that Zhao has done to him, Zuko still tries to rescue Zhao— but the Admiral refuses to accept Zuko's help, allowing the spirit to drag him under the waves. Zhao is never seen again— in this series, at least.

Dawn breaks on a battered but still standing Northern Water Tribe. Master Pakku announces that he and a few other Waterbenders are going to the South Pole to rebuild their sister tribe. Katara's glad to hear this, but is concerned about Aang, who still has to master waterbending. Pakku says that he'd better get used to calling her "master," then. Sokka shares a moment with Chief Arnook, who reveals that he once received a vision of his daughter becoming the moon, and knew that this day would come. And so, with heavy hearts but high hopes, Aang, Sokka, and Katata prepare for the next leg of their journey.

Meanwhile, in the Fire Nation, Fire Lord Ozai is talking to his daughter. He says that Iroh is a traitor, her brother Zuko is a failure, and he has a task for her...