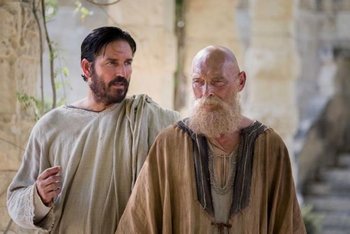 Just a couple of saints taking a walk.
Paul, Apostle of Christ is a 2018 biblical-historical drama depicting the final days of Paul the Apostle. Written and directed by Andrew Hyatt and produced by and starring Jim Caviezel, it draws from The Bible as well as the histories of Tacitus, Christian legends, and Hyatt's imagination.

Despite the title, narratively speaking the protagonist is Paul's friend Luke (Caviezel). Luke arrives in Rome shortly after the Great Fire destroyed half the city, and Christians are being persecuted because the emperor Nero blames them for the disaster. The Christian community there, led by Priscilla (Joanne Whalley) and Aquila (John Lynch), is divided over whether to flee for their lives or stay and help the many Romans left orphaned and/or homeless by the fire. Luke visits Paul (James Faulkner) in Mamertine Prison where he's awaiting execution, hoping that the old man might provide words of inspiration to the troubled flock. Meanwhile, the prefect running Mamertine, Mauritius (Olivier Martinez), starts getting curious about what the two men are up to, especially since his gods don't seem to be responding to his pleas to heal his dying daughter...

Paul, Apostle of Christ contains examples of the following tropes: