Muahahahaha!
-Captain Murphy, in most of his songs. 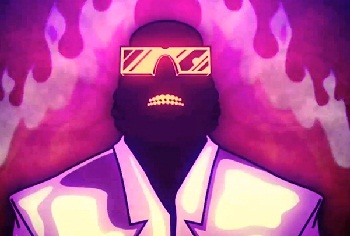 who the fuck is you, man?

The Captain is clearly bent on making a mythology for himself, his songs are unashamedly strange, and many (especially "The Ritual") deal implicitly or overtly with cults and cult leaders, and each has been accompanied by an animated clip to go along with the song (except "Shake Weight", which used an edited version of a pre-existing video by another band).

On November 15th, 2012, Captain Murphy released DuΔlity, a combination mixtape and film collage (the tape's music is set to the collage), it deals, again, pretty explicitly with cults. Soon after it dropped, Lotus and Murphy were outed as the same person, ending widespread speculation as to the Captain's identity.

Tropes that apply to Captain Murphy