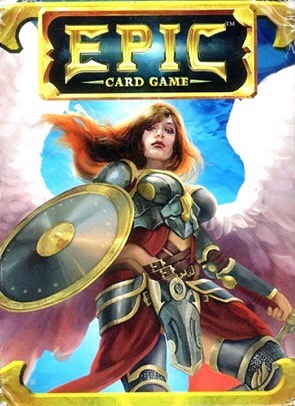 No longer could gods battle directly, tugging against one another on the fabric of reality. Now their wars are fought in the mortal world with mighty champions and devastating events.
Advertisement:

Epic is a fantasy strategy Card Game released by White Wizard Games, and designed by Robert Dougherty and Darwin Kastle. After accidentally tearing reality apart due to their fights, the deities in charge of the universe make a truce. After fixing up the previous universe, the gods now have to resort to using proxies instead of direct conflict.

This is where the game itself comes in: Players command champions and play events to reduce their opponent's score to 0.

What makes this fantasy game different from others is its resource system. Each player gains 1 Gold at the start of everyone's turn. Then they can use that 1 gold to play a card cost. If they don't, the gold goes away at the end and they start with 1 gold again on the next player turn. And cards are either free to play or cost only 1 gold. As a result, players can start playing super-powerful cards right away — no waiting to save up or gather resources. In fact, most of the cards in the game are powerful and useful, creating a sense of an epic struggle going on.

Another difference is that Epic is not a Collectible Card Game (though it originated as one). Though one can expand the game buying expansions, the players get all the cards in a single purchase (similar to Fantasy Flight Games' "living card game" model). Still, the game replicates the feel of a CCG, and has multiple formats in mind. Players can construct their decks, do drafts (even cube, though they need another couple of copies), and even play pre-constructed (just separate the alignments into their own decks). All the fun ways to play a CCG without the high cost and searching for powerful cards.

EPIC includes examples of the following: