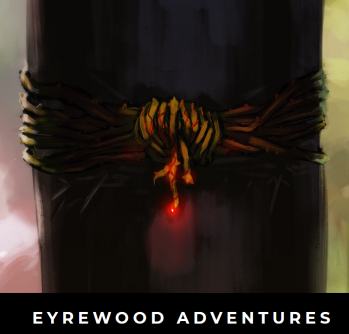 The Eyrewood reaches from top to toe,
And through this wood we all must go.
Let winter freeze, and summer burn!
What men must know, a boy must learn.
— The Lookouts creed
Advertisement:

is a High Fantasy setting created by Mike Krahaulik and Jerry Holkins of Penny Arcade. Starting out as a potential webcomic spinoff, the setting was later developed as a Tabletop Game by Lone Shark Games. The first game, Thornwatch, was launched on July 31, 2018.

The forest of Eyrewood is a realm of great wonders, but also many dangers. There are three major groups devoted to protecting their charges:

A general description of the factions

Comics set in the Eyrewood include:

Besides the above links to the regular Penny Arcade archives, all Eyrewood comics (except for the Cryptozoic series) can be found on the Penny Arcade Side Stories page