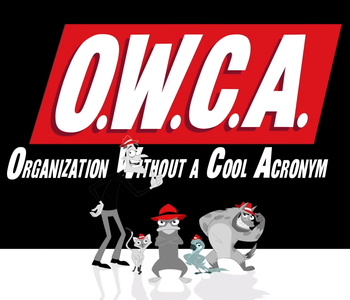 From left to right: Heinz Doofenshmirtz the "Ocelot", Karen the Cat, Perry the Platypus, Maggie the Macaw, and Harry the Hyena.
"These are the stories of the agents of the O.W.C.A. These are The OWCA Files."

The OWCA Files is the second and last Grand Finale of Phineas and Ferb. While Last Day of Summer was one for the whole series, this hour-long special is one for Perry's adventures (for now).

When a new enemy with a grudge on Major Monogram gets all the other agents of OWCA under his Mind Control, only Agent Perry and his newly formed team can stop him!

Problem is: Perry isn't used to teamwork, and said team is made of aspirant newbies (including Doofenshmirtz)...