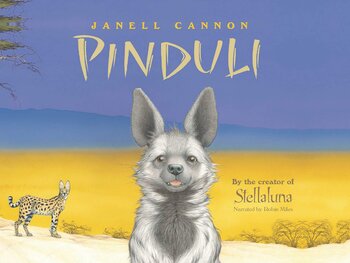 Pinduli is a short children's picture book by Janell Cannon. It was published in 2004.

The book begins with a young striped hyena named Pinduli waking up one warm afternoon. She decides to go explore the local water-hole by herself. While at the waterhole, Pinduli ends up bullied for her appearance (an African painted dog mocks her large ears, a lion comments on her mane when she erects it in a threat display, and a Grevy's zebra calls her stripes unpleasantly hazy). Suddenly self-conscious, Pinduli decides to pin her ears back, slick down her mane by soaking in the waterhole, and cover herself in dust to hide her stripes. The other animals mistake her for a ghost. Pinduli, using her ghostly appearance to her advantage, learns that the animals were previously bullied themselves, and took out their anger on her, so she makes the animals give her offerings and tells them to make amends with their bullies. Afterward, Pinduli returns home with food for her and her mother.

Cannon has also written Stellaluna, a similar picture book about a bat, and Verdi, about a snake.