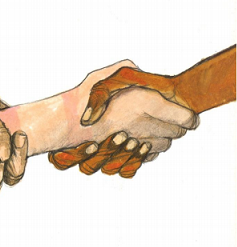 The hand that shook the hand of Abraham Lincoln
When Sheldon Russell Curtis told this story to his daughter, Rosa, she kept every word in her heart and was to retell it many times over in her long lifetime. . . I will tell it in Sheldon's own words as nearly as I can.
—Patricia Polacco
Pink and Say is a picture book by Patricia Polacco, based on a family story that was passed down to her by her father. During the Civil War— 15 year old Sheldon "Say" Curtis, a white Union soldier—is shot in the leg and lies on the battlefield, delirious with fever, for two days. He is rescued by Pinkus "Pink" Aylee, a former slave who is now in the Union army. Pink takes Say home Georgia where his mother, Moe Moe Bay, nurses Say back to health. The two become friends. Pink teaches Say to read. As Say gets closer to Pink and Moe Moe he realizes why Pink is passionate about fighting against slavery. But Pink wants to go back to fight the good fight. Their peace cannot last forever. Pink and Say is a powerful book about The Civil War, slavery, and humanity's capacity for both good and evil. Make no mistake. It may be a picture book, but it will stay with you always.

This book serves as a written memory for Pinkus Aylee since there are no living descendants to do this for him. When you read this, before you put this book down, say his name out loud and vow to remember him always.