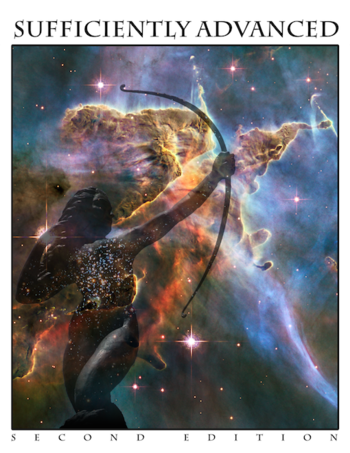 Once we reached for the stars. Now we have them. What we do with them is up to us.
We left Earth behind, though we will never forget it.
Advertisement:

Sufficiently Advanced is a tabletop roleplaying game that reaches for the outermost limits of what we think is achievable. Grounded in hard science, but speculating incredible advances, Sufficiently Advanced (or S.A. for short) looks at a future in which nanotechnology, computing, medicine, and other fields have advanced to the limit of our current understanding — and just a bit beyond. It’s a look at what these technologies might do to the world and what societies might form around them. It is a game about responsibility and the drive for a better future. It is a game fundamentally about humanity, as well as some of its descendants.

Most importantly, SA is a game of exploration and political machination set in a universe where everyone has nearly godlike capabilities at their disposal — and the world wasn’t destroyed by it.

SA is about technology as far beyond what we have now as we are beyond the cavemen. It's about a world truly changed by this technology, not merely today's world enhanced. It's about a cultural milieu created by the dregs and lunatic fringe of the 21st century. It's about the line between freedom and chaos. It's about trusting that someone who knows and changes the future is keeping a place for you in it. SA is the story of humanity in all its myriad forms, and the thousand things it might become.

So far, they have released the following: