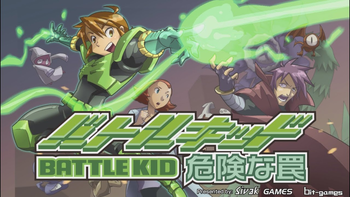 I Wanna Be the Guy meets Metroid meets Mega Man.
"And here...we...go!"
Advertisement:

Battle Kid: Fortress of Peril is a 2010 NES game by one-man operation Sivak Games. The gameplay is basically an honest version of I Wanna Be the Guy (i.e, all the Nintendo Hard challenge of the original, minus the infamous out-of-nowhere surprises and Trial-and-Error Gameplay) with heavy Metroidvania elements. It uses an eight-character password for continuing (unless you're on one of the difficulty levels that don't let you continue). It boasts "over 550 rooms, more than 30 enemy types, and 8 bosses" standing between you and victory.

The plot is as follows: You are Timmy, a One-Hit-Point Wonder Kid Hero tasked with infiltrating the Fortress of Il'Akab, also known as the eponymous Fortress of Peril (due to all the traps and defenses and such, naturally,) in order to prevent a Humongous Mecha from being built.

One of the more notable things about Battle Kid was that, while a demo version exists as a freely available ROM

, the full game was originally available only in the form of an actual NES cartridge sold by RetroZone

, complete with multi-region lockout chip, manual and dust sleeve (but no box). Twelve years later in 2022, it was finally published for digital distribution on Xbox One, Xbox Series X|S, and Windows (via itch.io) by 8-Bit Legit.

Also, a sequel was made.