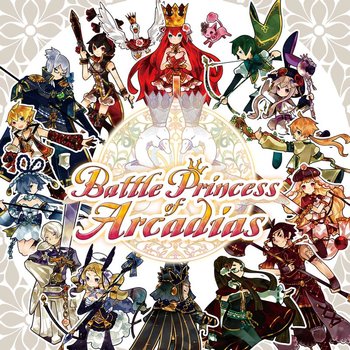 Battle Princess of Arcadias is an Action RPG produced by Nippon Ichi and developed by Apollo Software for the Playstation 3. It is the fifth and final game in Nippon Ichi's Anniversary Project.

The world has been overrun by monsters and people all across the land have worked tirelessly to fight against this overwhelming threat. Fighting on the front lines of each country are the Battle Princesses, powerful maidens who possess overwhelming fighting prowess. One day, the Battle Princess of Schwert Kingdom, Plume, finds all of her soldiers have been massacred by a massive monster, including her attendant. This battle marks the beginning of Plume's journey.

Gameplay takes place on a 2D plane and the battle system is mostly reminiscent of Action RPGs made by Vanillaware. However, the game offer three types of battles — Combat (traditional Beat 'em Up style gameplay), Skirmish (taking on enemy factions while controlling your troops in the background), and Seige (gathering your troops to help you vanquish a giant boss).