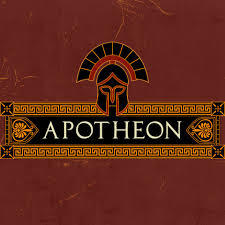 "As Humanity's last champion, you must pass through the land of the dead, infiltrate Mount Olympus, and end the Wrath of the Gods. With sword, shield and spear in hand, you will sneak, conspire, loot, and battle your way through majestic palaces and chthonic depths as you climb toward godhood."
— AlienTrap

is a 2d epic heavily based on Greek Mythology. It is a Hack and Slash, with Platformer elements and its art style beautifully mimics the black-figure art style that is most commonly related to the pottery of Ancient Greece. If you are even moderately familiar with Ancient Greek art, you will find its representations are very similar to those of the original pieces, as their attention to detail seeps in the majestic representations that permeate the entire game's style. For those not familiar with Ancient Greek art, it means that there is a healthy amount of penises and breasts to look forward to.

As the very name of the game suggests, your task is to ascend to godhood. This means that your character, Nikandreos, will join the likes of Hercules, The Roman Emperors, George Washington

, and The Flying Spaghetti Monster. This task is spurred by the decree of Zeus, who gets tired of humanity's flaws and decides to end their lives. Nikandreos rises up to the challenge of stabbing the gods for their powers, or taking the powers of a host of deities for his own in order to challenge Zeus and save humanity.

Hera, Demeter, Hades, Ares, Hermes, Aphrodite, Hephaestus, and a whole slew of mythological beasts and deities appear throughout the game to be convinced by Nikandreos to relinquish their powers to him for the good of humanity. And if not to him, then to whatever weapon he chooses to wield at the moment. Nikandreos is particularly poignant in getting the point across via a liberal application of Blast Jars, Greek Fire, Xyphos, Sarrissa, Sagaris, or Clubs. As seen in the names of things and the narrative, the work is definitely deeply steeped in the knowledge of myths and Ancient Greece in general.

The game was released on Steam and the Playstation Network on February 3rd, 2015, and it was made by Alien Trap Games