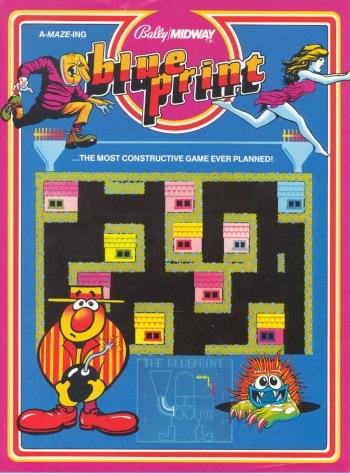 Blue Print is a 1982 Maze Game, developed by Zilec Electronics and manufactured by Bally/Midway. It was released for arcades, and ported to the Atari 2600, Atari 5200, and Commodore 64 by CBS Electronics.
Advertisement:

In the game, you play J.J., an inventor whose girlfriend Daisy is being chased by the evil Ollie Ogre. To defeat him, J.J. must scour the houses of a village to find parts of a machine based on a blueprint and assemble it without collecting bombs or running into Fuzzy Wuzzy.