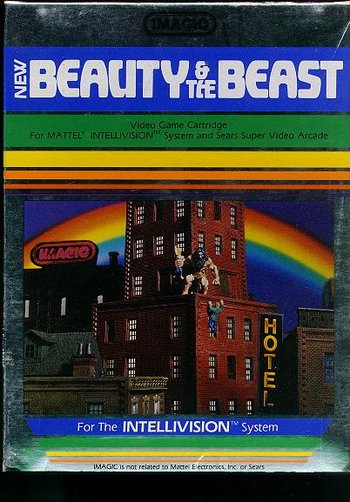 Beauty And The Beast is a 1982 Platform Game, developed and published by Imagic for Intellivision.

The player controls Bashful Buford on his quest to save his girlfriend Tiny Mable from the grip of the evil Horrible Hank who has taken her and scaled the old Mutton Building. Along the way he must avoid birds, rats, and objects thrown at him by Horrible Hank while watching for the windows to open so he can climb up to the next ledge. Mable will occasionally throw hearts down to Buford that he can use to make himself invulnerable for a short time.

If it isn't clear already, this is not based on the classic fairy tale, nor its Disney adaptation.