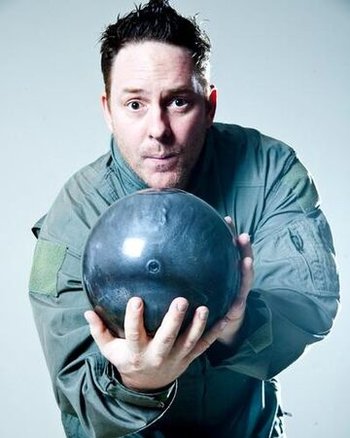 Jeffrey Hanson "Jeff" Richards (October 21, 1974 in Walnut Creek, California) is an American comedian and actor. He first broke through as a comedian while living in Los Angeles. In 2000 his stand-up and impressionist skills won him a brief featured slot on MA Dtv.

In 2001 he joined the cast of Saturday Night Live, debuting in the first post-9/11 episode. Richards was the first MA Dtv veteran to join the cast of SNL, and is still one of only two, the other being Taran Killam (though of the two, Taran Killam is more well-known as being a former MADtv cast member who crossed over to SNL, and lasted longer than Richards). Along with a few recurring characters he still specialized in impressions, playing among others Al Frankennote making him one in a handful of MADtv cast members — both from the FOX episodes and the failed CW revival — to play a Saturday Night Live cast member, joining Will Sasso as Chris Farley, Frank Caliendo as Norm Macdonald and Janeane Garofalo, Michael McDonald as Robert Downey, Jr. and Adam Sandler; Alex Borstein as Janeane Garofalo; Aries Spears, Keegan-Michael Key, and Nicole Randall Johnson as Eddie Murphy, Phil LaMarr and Nicole Randall Johnson [again] as Chris Rock, Phil LaMarr as Billy Crystal, Craig Anton as Dennis Miller, Ron Pederson and Piotr Michael as Jimmy Fallon; Jeremy D. Howard as Tracy Morgan, Nicole Parker as Sarah Silverman, and Crista Flanagan and Taran Killam as Gilbert Gottfried [though Killam did his Gottfried impression when he was an SNL cast member], Bill O'Reilly, Phil McGraw, Howard Dean, Michael Moore, Kevin Spacey, David Letterman, and Curly Howard. In his second season (season 28), he was joined by former high school friend Will Forte.

Richards left SNL mid-season in the winter of 2004 (his last episode was the one hosted by Jessica Simpson and her then-husband, Nick Lachey). To this day, it's not known whether Jeff quit because of creative differences with Beth McCarthy-Miller (SNL's director at the time) or if Jeff just wanted to branch out and do other projects. Since then he has returned to stand-up and appeared on shows such as Mind of Mencia, Flashforward, and 'Til Death.