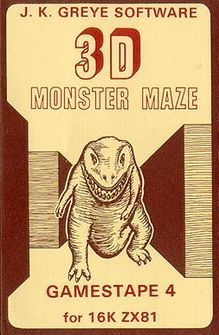 "Roll up, roll up, see the amazing Tyrannosaurus Rex, king of the dinosaurs in his lair. Perfectly preserved in silicon since prehistoric times, he is brought to you for your entertainment and exhilaration."
— Part of the intro narration
Advertisement:

3D Monster Maze is a video game released in 1982 for the ZX81. It is one of the first ever 3D games, as well one of the first Survival Horror games ever made, coming out seven years before Sweet Home. In it, you roam in a maze to find the exit while avoiding a Tyrannosaurus rex that chases you. The goal is to collect as many points as possible by avoiding getting eaten and getting to the exit.

You have been posthumously awarded 45 points and are sentenced to roam this wiki forever.
To appeal press STOP, else press CONT.