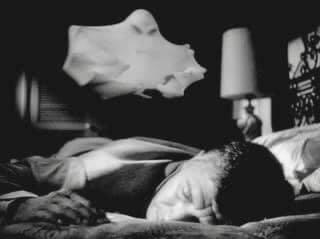 The Plag attacks a sleeping Meridith.
The Control Voice: Outwards stretches the quest for truth. Stars without end, timeless infinities. A billion billion galaxies. Man's imagination reaches out and out, while betimes, the farthest reaches of knowledge are found in the smallest places.

A scientist recreates an alien planet in a laboratory that is inhabited by an evil entity.

The Control Voice: There is a theory that Earth and sun and galaxy and all the known universes are only a dust mote on some policeman's uniform in some gigantic superworld. Couldn't we be under some supermicroscope, right now?