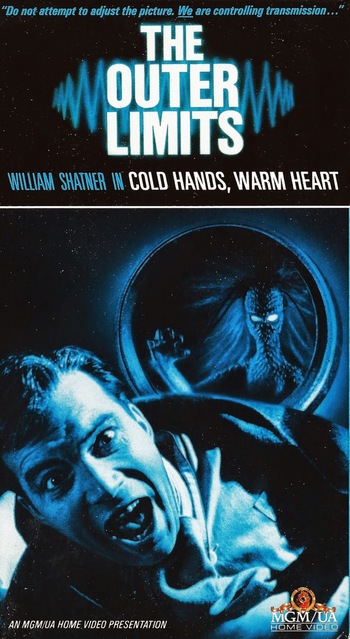 The VHS cover, showing the Venusian and Jeff's understated reaction to it.
The Control Voice: The most brilliant planet in our solar system is Venus, named for the Greek love goddess. It is closer to Earth than any other planet — 28 million miles away. Until sometime in the last half of the 20th century it is still a planet shrouded in mystery, enveloped in a heavy blanket of clouds and steam. Because its surface temperature was believed to be several times that of Earth's, it was not thought possible for Man to reach Venus and come back... until one day, somebody did it.

That somebody is Colonel Jeff Barton (William Shatner), a brave astronaut working for Project Vulcan, a space exploration project whose ultimate goal is the colonization of Mars. After receiving a hero's welcome, Jeff returns to his devoted wife Ann (Geraldine Brooks) while preparing to help NASA with the next phase of the project, but their domestic bliss is shattered when Jeff suddenly collapses one night.

The Control Voice: The eternal, never-ceasing search for knowledge often leads to dark and dangerous places. Sometimes it demands risks not only of those who are searching, but of others who love them. These, in their own special way, know that knowledge is never wasted, nor is love.